A new beginning....a continuation of our story....a new adventure....whatever you want to call it! But the Hahn Family definitely has made some changes this year.

First, since this started as a running blog, let's get caught up on how running is going for me since my foot surgery.

In a word, SLOWLY. But I'm okay with that right now. It's been a tough couple of years, first with rotator cuff repair in late 2020, then a tough training cycle trying to get back into shape, then running a marathon with the first symptoms of Covid late 2021, then needing foot surgery spring 2022. I couldn't run for nearly 3 months, and was definitely out of shape when I did start back on June 14.

I gave myself a lot of grace. I had been feeling a ton of stress and had some physical issues unrelated to surgery that caused fatigue and weakness leading up to my return to running. I only run about 3 days per week, 3-4 miles at a time. By the time I began it was already deep into Texas mid-year heat and it was brutal, and because I am running so little, I've never acclimated to it. It's not a big deal...I am not planning on running another marathon anytime soon and I think my body is perfectly fine with taking it very easy this year. It's a complete departure from 2019-2020 when I ran over 2000 miles in a 12-month period. But we all have different seasons, and right now my season consists of very little running.

I go to the gym a few times a week and am working on strengthening. My repaired shoulder seems to have its pre-accident strength back and that thrills me. For so many months it seemed like a pipe dream that I could ever be that strong again. But with some consistency it's coming back to me.

After I got Covid, I decided to defer my January race in Baton Rouge to 2023, but have since decided I'm not going to run it after all. I do have a new race picked out...but my reasons for choosing it have a lot to do with another change our family has made.

Back in May, Greg was recruited by Amazon Web Services to interview for a position as Head of Supply Chain and Procurement for AWS Networking (yes, it's a mouthful and that's not even the full title). Over the course of several weeks, he interviewed and received an incredible offer to come work for them. While he enjoyed his time with Calix, we both felt, after many discussions and going back and forth, that it was time to move on and think long term with retirement. There was a catch, however. He would be required to live in either of the other two Amazon hubs, San Jose or Seattle. Neither was ideal, and we did not intend on permanently moving. Our daughter is in her last year of high school and relocating would be too difficult. Besides, we love our home.

This was a hard decision to make. Spend more time apart, maintain two homes, fly back and forth all the damn time? San Jose was quickly ruled out because neither of us have any intention on moving back to California. The income taxes alone piss me off to no end. So Seattle became the choice, and it was a huge leap of faith to say yes to the job. But we said yes and a new adventure was born.

Once he accepted the offer, things moved fast. He had to wind down his job at Calix, he was able to cancel an overseas trip and instead come with me at the last minute to my 30th high school reunion, and we had to find a place to live. Greg spent the first two weeks in August in Seattle, and our daughter and I flew out for a few days to find an apartment. We chose the Denny Triangle/Belltown area to stay as close to Amazon HQ as possible so Greg wouldn't need a car. The walkability score in this area is 100, so a car is pretty much pointless. Public transportation and Uber would be more than enough to get him around in addition to walking. 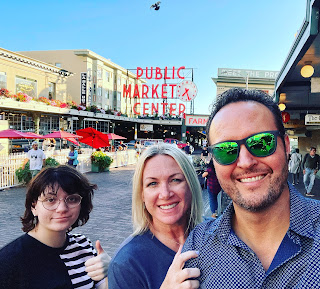 I've never done high rise living before, and it was a bit of a shock to be a part of this kind of scene. We found a fantastic place with the most incredible view of Puget Sound, somewhere we knew Greg could call home, I could come visit as often as possible, and he would integrate himself into the Amazon/Seattle life as seamlessly as possible. The more comfortable he was, the easier the travel would be. Nobody wants to live out of a suitcase in random hotels all the time.

Did I mention the view? 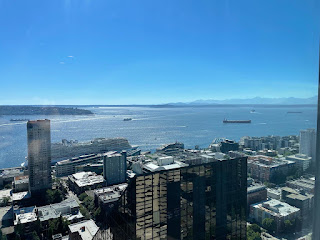 We moved into the apartment in early September and slowly things are taking shape. Most furniture has been bought and delivered and Greg makes it more and more like a real home everytime he's there. I'll be there again in just a few days and I'm so looking forward to it. 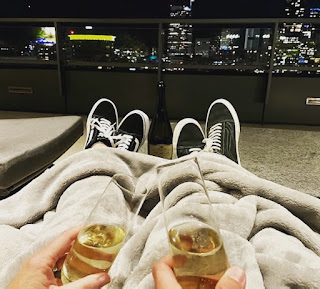 An incredibly cool part of being in Seattle is that I get to visit my sister's grave. I was able to visit when we apartment hunted and when we came back this past month, right around her birthday. It's so special to me to be closer to her again. 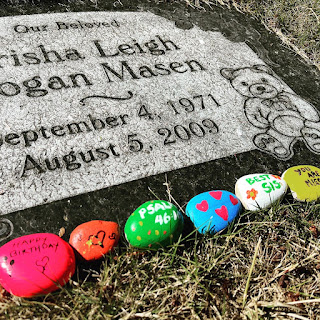 Thankfully Greg is still home here in Round Rock more than he's in Seattle, and this won't be a permanent move. It's vitally important for him to spend as much time with the team at the headquarters as possible, learning the Amazon culture and getting up to speed so he can be as effective of a leader as possible.

Besides, having a little weekend getaway when I need it? That seems like a really fun new adventure after 23 years of marriage, and being on the cusp of the empty-nest phase or our life. It may have felt like the craziest choice at first, and I had a ton of anxiety about it, but the more settled he becomes in Seattle, the more my anxiety (and his) lessens. He likes this job, although it's obviously intense and busy. We are getting used to the constant trips to the airport, and our daughter is acclimating to a little more responsibility at home helping me out, and thankfully we've got friends (and our adult son!) that are on call to be sure our house is never empty and our dogs are taken care of. (Thank you Heather!!) 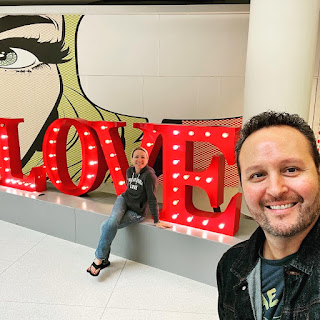 I've got to throw in a little shout out about our son, who just began his third year in college as a Computer Science student. He's already a senior and will be graduating next spring with his Bachelor's degree. We are INSANELY proud of him and all his hard work these last couple years.

So back to running.

In 2018, in his quest to qualify for Boston so he could run it with me in 2019, Greg ran the Jack and Jill's Downhill Marathon just east of Seattle. Since I plan to spend as much time in Seattle next summer as possible, I'm going to sign up for this race, but ONLY the half marathon. I'm continuing to give myself a lot of grace to ease back into running long distances after a tumultuous year. I think it will be great to run where Greg had his epic first marathon, and the logistics will be so easy since we have a place there. Greg, however, has no desire for me to also sign him up!

It's not the 2022 I envisioned but to say I'm excited about what the future holds is an understatement. And I give it all up to God. I put my trust in him when I needed to, more than I ever have in my life, and he has provided in abundance. I'm closer to God than I've ever been, my faith is stronger than I thought possible, and it makes the future look beautiful. Even with the struggles, the worst of them, God is in control. Life may not look like you thought it would, but you can do anything if you follow close behind God. 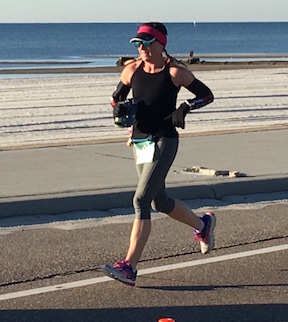 Steph
I love to run. I love my husband and my family. I’ve run countless marathons, done a few triathlons, been a personal trainer and running coach, injured myself too many times, and refuse to quit. I want to travel the world and live humbly in God’s glory. I mostly write about my adventures in running and marathon training, but I also tend to reflect upon my life, faith and struggles